Congratulations to the finalists of the 2017-18 European Ada Awards, an initiative recognizing outstanding girls and women in digital studies and careers across Europe, and the organisations who support them! Join us on 30 November at BeCentral in Brussels for the 2017-18 European  Ada Awards and Digital Brusselles Celebration where winners will be announced!

Cat is a Raspberry Pi Certified Educator, an Apple Distinguished Educator and a Google Certified Teacher. She initiated an event called Coding Evening for Teachers in UK that  brings together teachers, coding professionals and tech enthusiasts and allows them to work together to discuss ideas for the classroom. Her independent work has led to her being invited to Brazil to train and speak to a number of Brazilian teachers about the importance of computational thinking and basic computer science skills. She is a role-model for young, female coders and a lot of her outreach work includes working with groups that are actively encouraging girls to get involved with coding, including girls-only CoderDojos in London. 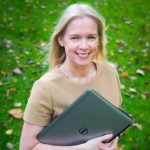 When she started at Dell, Pascale was the only woman on the local leadership team. Tackling being female leader challenge in a positive way along with the learning experience is what motivated her to start building alliances to raise awareness around gender equality and bring about change. Pascale has been active for years in mentoring young women, speed-dating with students and coaching female entrepreneurs. She is a role model to women thinking about entering a career in the digital world and to those who have started a career within Dell.  She regularly “talks the talk” and “walks the walk” regarding the skills needed for a career in tech, at high-level events such as the NATO’s annual cyber symposium NIAS where as a speaker she raised awareness around the need for female talent in cybersecurity along with diversity and inclusion in any future-oriented organization. 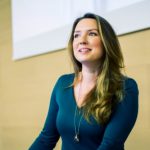 Egle inspires people of all ages to take part in the ICT industry through whatever means, despite any boundaries imposed by the society. She continuously shares her experience in breaking the industry’s boundaries through interviews and personal communication. Egle always emphasises that girls should not be afraid of the digital occupations, as she herself has made a successful transfer from a humanitarian background. Egle shares her experience and motivates women to partake in the fields of Computer Science – she has recently joined the Baltic Institute of Advanced Technology, which aims to create, develop and disseminate scientific knowledge and expertise about in the field of technology and innovation.

2017-18 European Ada Award Winners will be announced at the fifth annual European Ada Awards Ceremony on 30 November 2017 at BeCentral in Brussels, ahead of the celebration of the 202nd anniversary of the birth of Lady Ada Lovelace!  Public attendance is welcome but registration at this link is required!